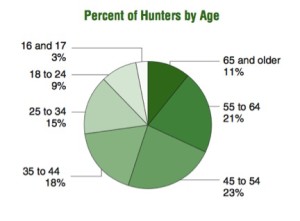 The aggregate spend on hunting trips, accessories, and weapons has soared in recent years, up in the US over the last decade to just under $40 billion (from around $26 billion in 2006). However, the number of Americans that are participating in the sport has not grown over the same period. In addition, sales in recent months have been hit hard and the upward trend on spend may be over.  Much of this is tied to the plight of baby boomers – a demographic that is shrinking but that has no problem in spending more on the products they love. That poses product development challenges and opportunities for archery and hunting wholesalers and retailers alike.

Currently some statistical reports show that roughly a third of all hunters are over the age of 55. And as they head into the sunset of their lives, they are willing to spend big in order to keep up with cherished pastimes.

While inflation adjusted expenditures on hunting has been rising (at least up until 2014), the participant rates have languished. Even the most active states are seeing a dramatic drop in the number of gun licenses for hunting. Without participation growth, sales will eventually fall, and this is exactly what we have been seeing in big box retailers as of late. 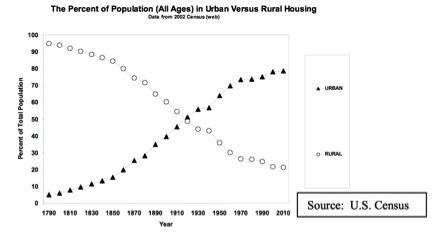 Demographics and the Impact on Archery & Hunting

Many of the underlying problems are driven by demographics, which pose a serious threat to the hunting industry. For starters, the US population is increasingly becoming more urban and suburban at the expense of rural areas, which are traditionally the mainstays of hunting. With a smaller population likely to hunt, the manufacturers of hunting equipment and accessories are finding it more and more difficult to capture growth given they are competing for a larger share of a wallet across a stagnant demographic. In addition, the problem is exacerbated because the increasing urbanization of America is contributing to a deterioration of a hunter’s social group for the sport (as people migrate from one location to another). Urbanization also takes away land that could have been hunted, forcing participants to travel further than they otherwise would need to travel in order to find hunting lands.

And to top it all off, the white/Caucasian population in America is declining. This is the ethnic group most likely to hunt.

All signs point to difficult times ahead for the hunting industry and only the astute manufacturer will know how to position itself to insulate its sales from these headwinds and leverage the pockets of opportunity that can be found if positioned correctly.

To understand how to navigate the troubled waters one needs to understand the psyche of the business. For starters, hunting initiation is typically captured at a young age – a rite fathers pass along to their children. Hunters come from hunting families and hunting families produce hunters. And because this rite of initiation is most typically found in rural areas, which we know are declining, the number of individuals entering the sport is shrinking.

What is certain, though, is that because the sport is generally taken up at a young age, because it is often begun with a father, there is a strong emotional bond between the hunter and his sport. This bond translates to his or her gear and equipment as well. Greater dedication through years of practice poses both benefits and challenges to manufacturers of hunting products. An emotional attachment to brands is a big driver of spend, which offers large opportunities to brand extensions into related products and categories.

There are other challenges as well. Growing family and work obligations and a lack of free time pose an increasing threat to the sport. But they also offer key insights into product development opportunities for creative manufacturers. We have seen some very unique product development ideas that offer a time saving value proposition to the hunter and they have been very well received by both new entrants and lifers alike. 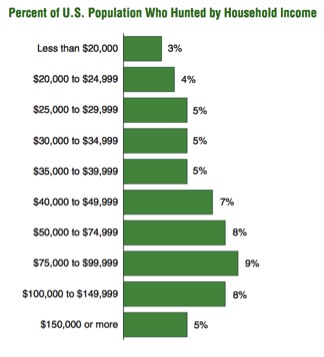 Hunting is not an inexpensive past time and while the numbers of participants may not be witnessing meaningful growth, they are still an economic powerhouse that offers great demand potential for manufacturers and distributors. Hunters will traditionally spend upwards of $2,800 per year on the sport and roughly 50% of this amount will be on equipment.

More people hunt than play tennis. More people hunt than ski. And they spend more time and money doing it as well. But with almost ¾ of the hunting participants making less than $50,000 per year, cost is a very important driver of equipment purchasing decisions. With this group, more than 5% of their annual income is being spent on their sport and cost considerations can quickly push aside brand affinity for certain products. This is why we are seeing so many manufacturers seek lower cost equipment solutions in China so as to maintain product competitiveness and grow the product’s customer base.

With the right team and focus, there are still tremendous opportunities to capture a greater share of wallet in hunting but it requires a willingness to change and to explore new ways of doing old things. The companies that understand this and that can find an effective means to implement are the ones that will succeed.