The fallout of the 2008-2009 crisis still lingers and has left a lasting impact on the global economy that will continue into 2013.  Global growth will have dropped to around 3 percent in 2012, which is reduction of about half a percentage point off the long-term trend since the crisis emerged. There is still a high level of uncertainty across key regions – from the ‘fiscal cliff’ concerns in the U.S. to the Chinese leadership transition and reforms in the Euro Area.  All of this uncertainty keeps a lid on investment and ultimately hurts trade.  As a result, the risks continue to be skewed to the downside, favoring a more cautious outlook for next year.  From a factor cost standpoint, this should translated into a more stable inflationary environment for Chinese goods

Through November, the RMB has appreciated against the USD by roughly 1% in 2012, well below what most analysts thought would happen at the end of last year. Much of this has been due to the slowdown in China and the continued reliance on the export sector to fuel wealth creation. There are many who believe that Beijing is going to speed up the opening of the country’s capital account and that the RMB will become a convertible currency within the next five years.  Because most all commodities are priced in dollars, any rise in the USD (while not having an impact in real terms), will weigh on nominal prices.  The continued expected RMB appreciation vs. USD thus bodes well for raw material inputs for Chinese goods.

Basic improvements in the Chinese macro data and signs of strength in China’s white goods, auto, and infrastructure sectors has put upward pressure on base metals pricing in recent months.  However, the global outlook, which continues to be precarious, could hold any material price appreciation in check.  We look at the implication of each of the key base metals that form an important role in raw material inputs for hardlines manufacturers in China.

Copper (Cu): The global inventory pipeline for copper continues to be depleted and relief is not anticipated for at least a few more years.  Global copper production, like last year, already faces several structural problems (lower grades, increasingly complex new projects, adverse weather conditions and enhanced geopolitical risks).  This is exacerbated by capex reductions from many large producers due to higher costs and low prices for the metal.  On the demand side, there is much uncertainty given weak manufacturing, contraction in balance sheets and limited credit availability.  However, we believe that the major end-markets for Cu in China (power, autos, white goods) are looking much better.    This is especially true for power grid infrastructure (making up 47% of Cu demand), which is expected to grow 88% per Chinas Five Year Plan (2011-2015).  We can see Cu trading higher on the back of this investment, pushing RMB70,000 levels in 2013. 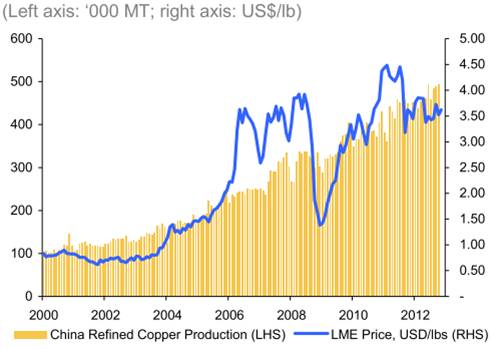 Aluminium (Al): High global inventories and excessive production capacity should keep Al prices down over the next 12 months.  Low LME prices, high costs, and low demand growth have already resulted in a number of voluntary non-Chinese cutbacks in capacity.  However, these announcements have been modest compared to total installed capacity and production.  Infrastructure spending in China, which is expected to increase next year, should put upward pressure on this metal but the degree of influence is not yet known.  Our best estimate is that Al prices will increase moderately in 2013 but around 6%. 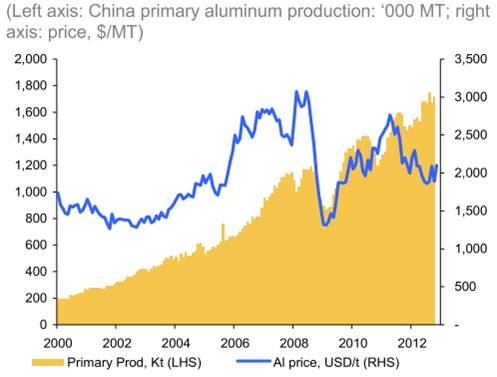 With the global economy continuing to cool and construction reeling from soft demand, it is expected that demand for steel will continue to show signs of weakness.  Today, China produces nearly half of the world’s steel. As recently as 1999, China was producing about 110 million metric tons per year, slightly more than the U.S. By 2004, the number rose to 250 million. Today, China cranks out nearly 800 million metric tons of steel a year. The next biggest producers are Europe (200 million), North America (150 million), Japan and the former Soviet Union (each about 120 million). China’s apparent steel use in 2012 is expected to increase by 4.0% to 648.8 Mt following 6.2% growth in 2011. In 2013, steel demand is expected to grow by 4.0%.  This projection brings China’s apparent steel use in 2013 to 674.8 Mt, 61% higher than the 2007 level.   Most analysts anticipate some price easing over the long run, although in the short term there may be some volatility.  A benchmark product in China – hot-rolled carbon sheets – is already selling around $520-$530/metric ton and should be selling for at least $600 just to cover costs. China has already started to cut production just like it did in 2010 and 2011. With this tightening in supply we expect $100 to $120 per metric ton increases.  Look for higher prices at the beginning of 2013 and easing as we move from 2Q13 into the second half. 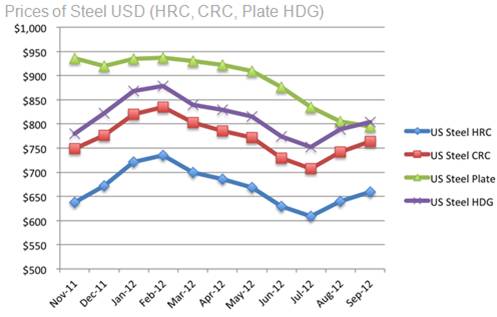 After climbing from the lows at the end of last year, the China Containerized Freight Index (CCFI) peaked in April and has since been on a steady decline.  We are now running close to the highs of 2010, although the trend continues downward.  Most analysts believe shipping costs will return to 2011 levels, except for some possible spikes in the run-up to Chinese New Year due to possible container shortages.  However, new orders for container ships are beginning to reappear on a larger scale following two years almost without contracting a single new vessel. The new orders are for ships due for delivery in 2013 and 2014.  New supply coming on-line, coupled with the weak global scenario and downside risks vis-a-vis Europe and US, all bode well for importers’ shipping costs in 2013.